Horses have always been majestic and mysterious creatures.  They are amazingly gracious animals and have the aura of aloof royalty, whether it be horses in the meadow or the free-roaming mustangs in Utah.  Many civilizations, most notably the Native Americans, viewed the horse as a symbol of wealth and have used these animals for hunting, travelling, trading and of course, warfare.  Horses became an integral part of the lives and cultures of these nomads, especially the Plains Indians and would later be known as the great mounted buffalo hunters of the American West.

Therapeutic riding was introduced to the US and Canada around 1960 when the Community Association of Riding of the Disabled was established (CARD).  In 1969 the North American Riding for the Handicapped Association (NARHA) was launched.

Most horses used in experimental mental health therapy, known as Equine-Assisted Therapy (“EAT”), are proving to do what doctors and psychiatrists often can’t.  These intuitive creatures are used to assist individuals, especially children, who suffer from mental and or physical disabilities or abuse.

At the start, patients are encouraged to touch/pet the horse.  Trust between patient and horse is built over a period so both feel comfortable by the time the next stage of therapy is introduced.  Horses are finely attuned on picking up human emotions and oftentimes these gracious animals pick their patients and not the other way around.

It was found that EAT promotes physical and emotional growth in patients suffering from ADD, anxiety autism, cerebral palsy, dementia, physical abuse issues and depression to name just a few.  The benefits of EAT are immeasurable and include:

Horses are also used to help military veterans whom suffer from “PTSD” (post-traumatic stress disorder) come to terms with their past and gently assist them for a better future.  The Combat Veterans Cowboy Up was started in 2006 by combat veteran John T. Nash and is a trained and certified Equine Specialist in Equine Assisted Psychotherapy.

Wracked by survivor’s guilt and not knowing where he fitted into society anymore, John drank heavily to forget about the horrors and nightmares of the Vietnam War.  One night he found himself in the barn, drunk as usual and with no reason to live.  A broken and abused horse rescued by his family by the name of Rain, watched over him that night and didn’t allow him to fall asleep.  That was John’s rock-bottom.  Rain saved his life that night.  Broken horse and broken soldier found each other and together they worked side by side to heal the other.

Some of these veteran military men and women have contemplated suicide as a way out but that was before they’ve tried equine therapy.  John started the equine programme for other veterans, and it is a free programme and totally dependent on donations.  Many of the veterans have testified that the equine programme has saved their lives and given them another chance.  John has stated that he’d often wondered why his life was saved when so many of his friends have died during combat.  He is convinced he was spared to help others in a similar situation.

Horse therapy is not always confined to the outdoors.  Old age homes and even hospitals benefit from the gentle contact with these majestic animals.

Watch how this special horse gives hope and brings a smile to the sick.  Witness the majestic connection between a terminally ill patient and this four-legged therapist.   He has a unique and special aptitude towards humans and brings a sense of comfort to those who need it most.

“Until one has loved an animal, a part of one’s soul remains unawakened” ~ Antole France 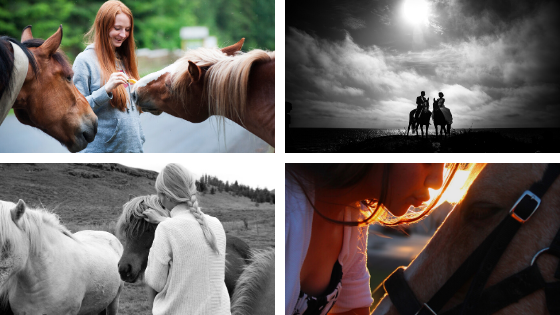